Yesterday I went to the Orange County Museum of Art to see the exhibit of Richard Diebenkorn’s Ocean Park Series. I went with two painter friends and a non-painter. The non-painter felt he was in good company with three potential docents.

I have seen several Ocean Park paintings in museums over the years. Large, quiet, I always welcomed them, often being surrounded by other work I found either less accessible or incomprehensible.

So I looked forward to seeing rooms of this series. And there were rooms of them. Three or four paintings seven feet by eight feet in each room. Strangely as I went through the exhibit I felt little real connection. I did not feel much real presence from them.

In the fourth room along one wall were mounted eight small ocean park pieces done on cigar box lids. They were pieces Diebenkorn had done for friends as gifts and never intended for sale (or perhaps for public viewing).

These small pieces had the juice. They sung; they enveloped; they lured me in and held me. 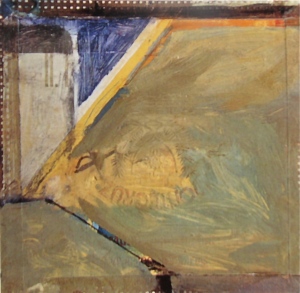 Interestingly as I communed with my favorite little painting, the non-painting friend came up and had exactly the same response to it.

I had always loved Diebenkorn’s work. But I realized most of what I had admired of the Ocean Park series was in reproduction. In a book both the five inch by five inch and the eighty inches by a hundred inches are about the same size on the page. The design and density of the large paintings actually looked better in reproduction.

As twentieth century printing became cheaper and more accessible art history went from people viewing originals to viewing pages of paintings, sculptures, alters, tapestries, architecture, all basically the same size, which radically abstracted the work and our relationship to it.

I recommitted to experiencing the large paintings. As I stood before these huge quiet pieces I realized I had an almost intellectual, not  painterly, satisfaction from them. There was beauty in how Diebenkorn articulated the space of the canvas. With horizontals, with verticals, with a few diagonals, repainting and repainting them. He found a way to tackle abstraction, of how to fill this space with such a quiet elegant simplicity. His insight of dividing and orchestration the space so simply created a body of work that defines a kind of abstraction. No one else can do what he did without it pretty much being a knock-off. Ocean Park becomes archetypal in that way.

As I stood in front of them and realized this, it warmed me. They were happy paintings. I wanted to like and admire the paintings. I like Diebenkorn.

But the take home lesson was clearly beauty does not need scale to hold us tight in her arms.