I’d heard of Watts Towers decades ago. In Canada. Built by a four foot nine Italian out of salvaged junk in Watts, CA, it was a testament to something: inspired, if wacky, creativity; the power of perseverance (Simon Rodia worked on it alone for thirty seven years); grand outsider art. I’m not sure. But I had a chance to go and see it last week and did.

Watts Towers is now as much a monument to community as it is to creativity. At one point the city wanted it demolished. A group of writers, artists and filmmakers banded together to keep it alive. As if somehow it symbolized the spirit of art in man and so had to be saved.

Now Watts Towers is a park with an art gallery, art workshop space, amphitheatre and public grass (Watts looks more like Tijuana than LA, so the grass stands out).

It’s hard to take a photo of the towers that gives a sense of the whole or of their scale. A very heavy tall fence now surrounds it. The tallest tower, ten stories, made of rebar, wire and concrete looks perfectly true from a distance.  Rodia used no scaffolding. Any ladders he used he created within, and as part of, the structure as he went.

Kids pour through on guided tours. Which is how I got there. The best, and really only, way to give a sense of the exuberant creativity is in the tile work. Embedded bottle glass, tiles, shells, broken plates, concrete reliefs, junk, stuff. It is everywhere. It covers everything.

The property is a large triangle, the house at the front and the backyard, which is where he built the towers, tapers back to a point, which faces east. There he built a tile encrusted fanciful concrete boat heading east, back to his home in Italy.

In a sense the most astonishing fact about the whole enterprise — Rodia finished after thirty seven years, walked next door, handed the keys to his house to his neighbor, and left.

But he didn’t go back to Italy. He relocated near his sister somewhere else in California. And never went back to Watts.

I’d heard of this wacky creative wonder decades ago in Canada. Everyone’s heard of it. Everyone in Los Angeles has heard of it. Everyone wants to go and see it. But I haven’t met anyone else that has seen it. I’m not even sure I’d recommend going. Except you do see what someone, with no resources, can do, can create, with their bare hands, over time.

Then that stops you, or stopped me. What can I do? With the time I have left. What wellspring of boundless creativity will I tap into? 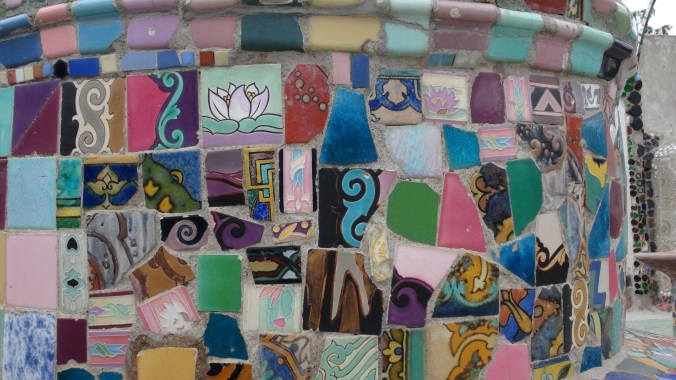